Irrational Fertilization and Its Impact on Yield and Production Economics

Mildly harmful phosphorus content is present on around 18.2% of land or 286,541ha, while extremely harmful to toxic phosphorus content is found on 5.4 and 2.4% of land and/or 58,018 and 39,360ha. This phosphorus content does not originate from our land’s parent substrate (our parent substrate does not actually contain phosphorus), which means that it was introduced by means of uncontrolled mineral and organic fertilizer application. In addition to excess phosphorus in our soil, excess potassium (K) is an even greater issue. 6.0% of the land is optimally fertilized with potassium, while 41.9% is optimally fertilized. The largest portion of land, 43.1%, is fertilized with this nutrient in mild excess. There is a significant excess of potassium on 7.2% of the land and it is toxic/unwanted on 0.6% of the land. Potassium in our soils originates from parent substrate or mineral fertilizers (the famous 15:15:15 combination, regardless of plant species and their nutritional requirements).

The lack of one of these nutrients could easily be solved by ameliorative fertilization. Their excess is more problematic and more difficult to solve. The uncontrolled application of fertilizers, especially on lots where phosphorus and potassium levels are above the optimum, can cause significant damage to cultivated plant yields, as well as the profitability of production. In experiments, sunflower yield, as well as the oil content in seeds, inevitably decreased on the lots where large amounts of potassium were applied, together with increasing doses of N (Table 1).

The results show that the decrease in yield is between 40kg/ha and 550kg/ha when applying irrational amounts of NPK fertilizers. A reduction in oil content of up to 2% is also observed. The application of increased amounts of mineral fertilizers decreases the yield, while simultaneously increasing the investment in the production process. This resulted in multiple losses of between EUR 50 and 241 per ha in production conditions, assuming that the investments in mineral fertilizers in sunflower production are at the level of average investments in the experiment. The effects of improper fertilization with NPK fertilizers on corn yields are shown in Table 2.

In order to properly adapt the technology for growing field crops to each field and/or part of it, the soil analyses and field history for that particular field must be obtained. In order to keep a field history with helpful and usable data, an electronic book of fields must be used. 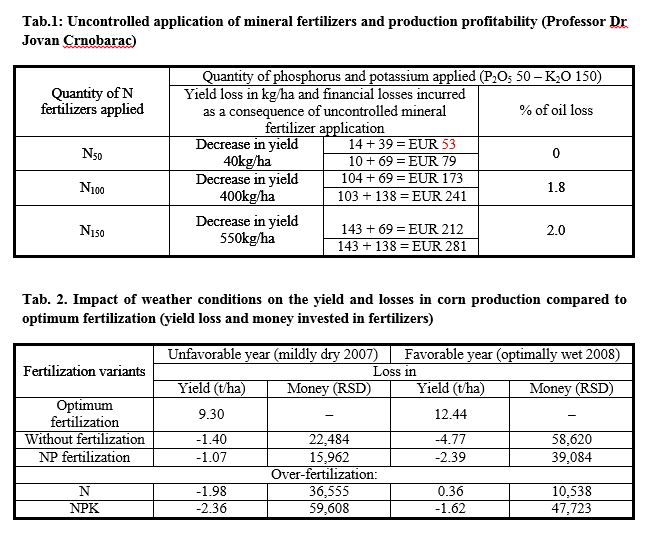